Bennington Trailfest was a big success!

Bennington's first Trailfest took place on Saturday, July 30th on a breezy, cool day at the Recreation Center. About 200 people, including about 60 thru-hikers attended the festival where there was free food, live music, trail talk, and information booths about hiking, camping, outdoors, and more. Please see the full description of the festival below the photos - article is from the Bennington Banner, Tuesday, Aug.2. 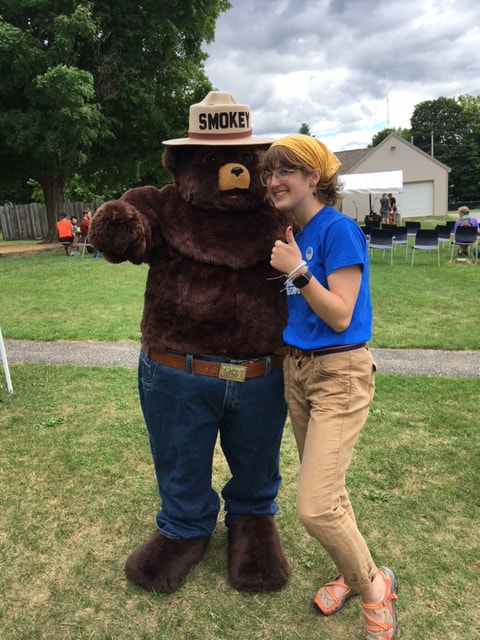 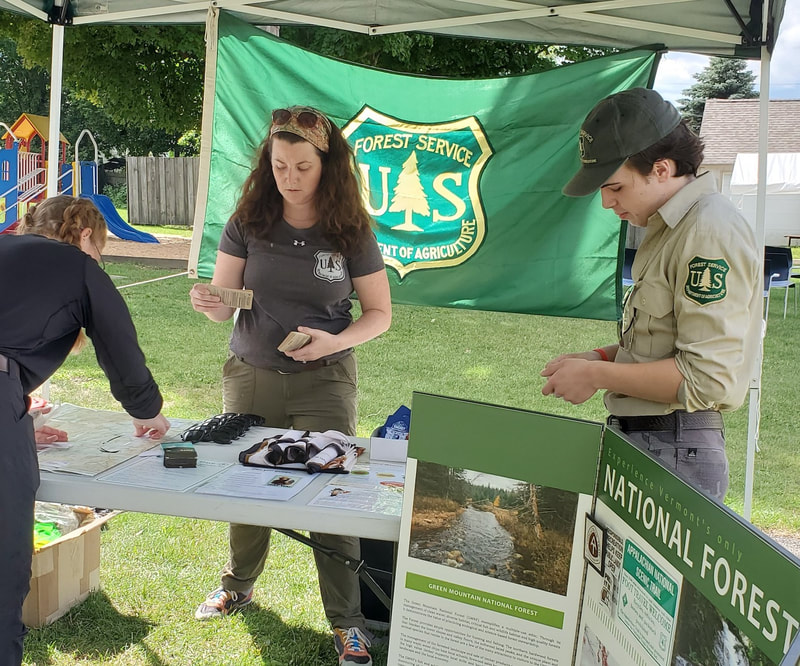 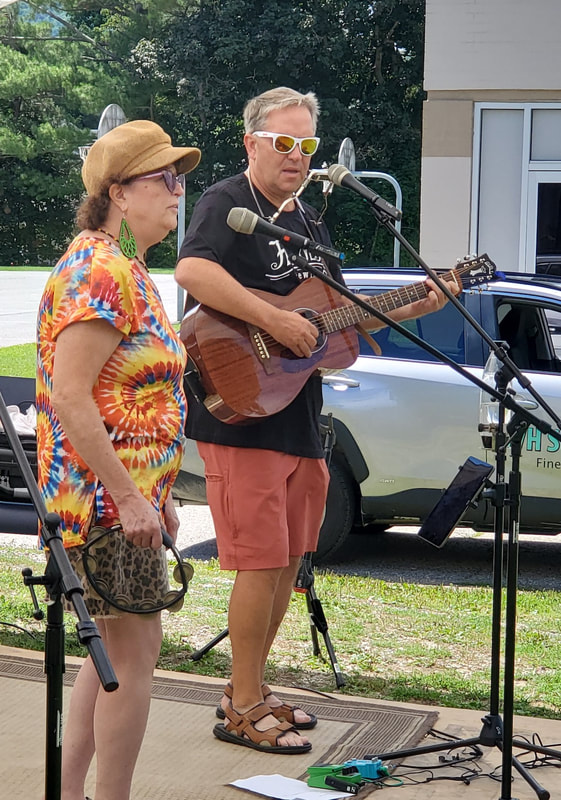 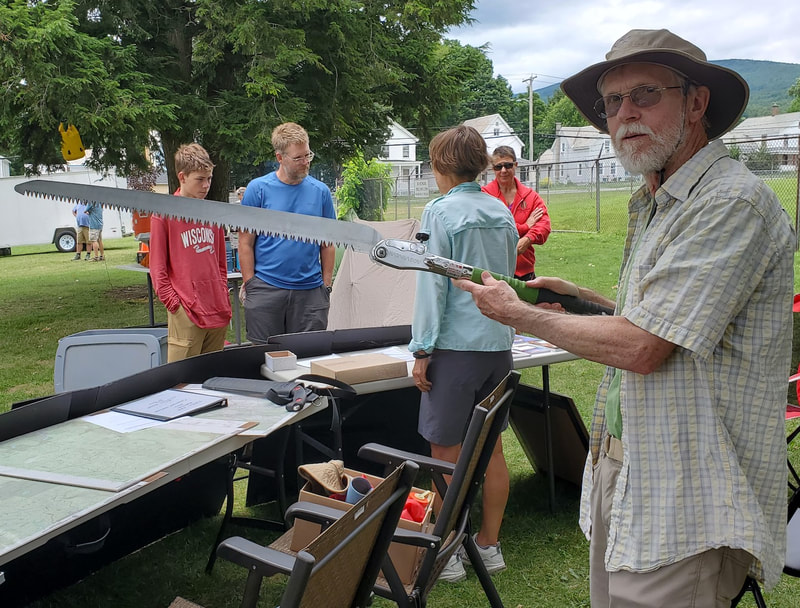 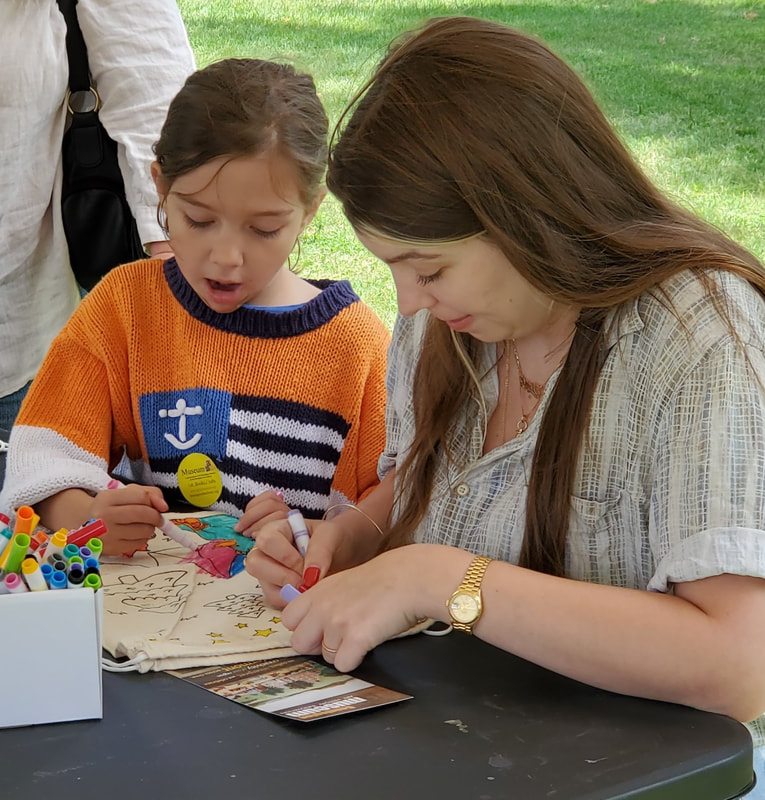 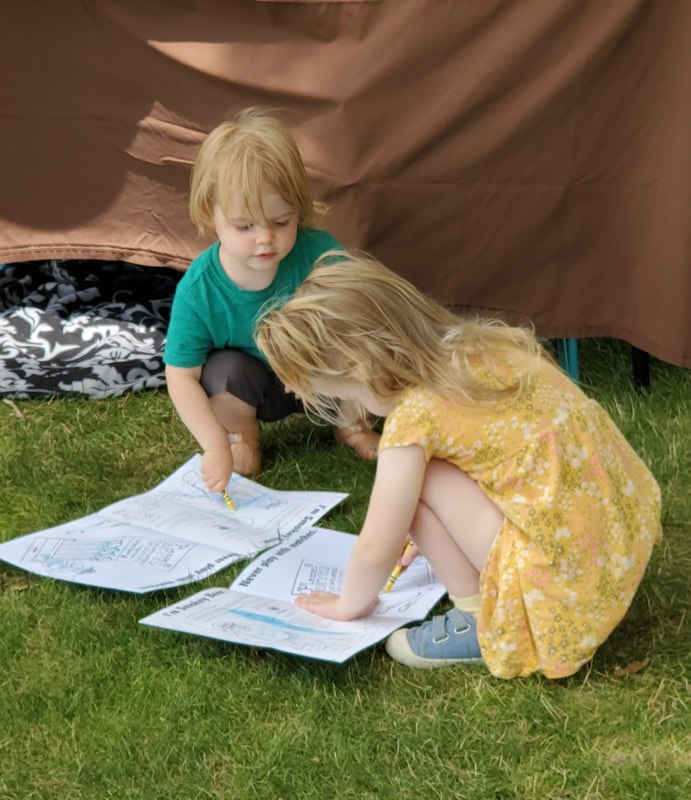 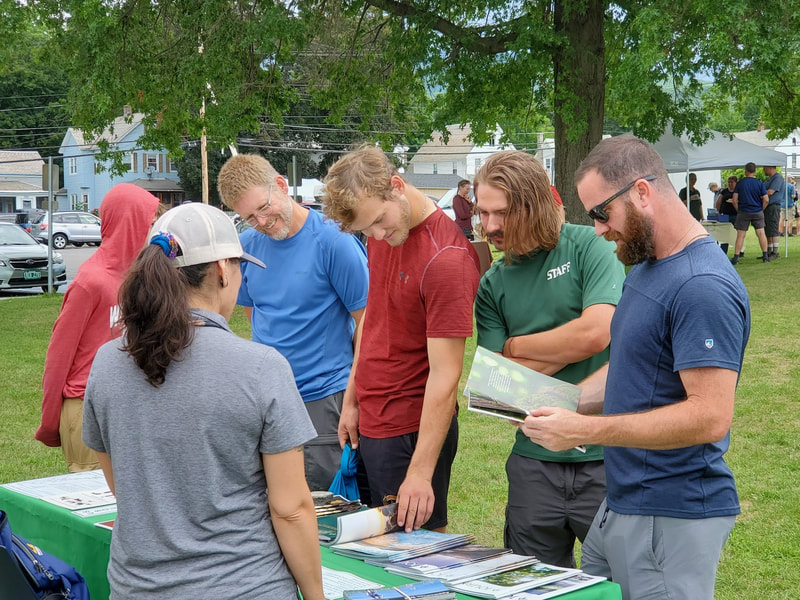 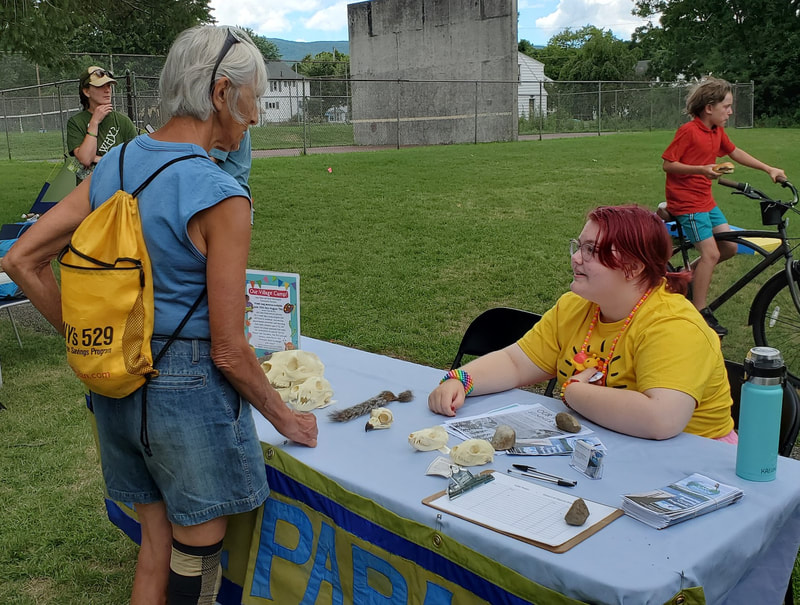 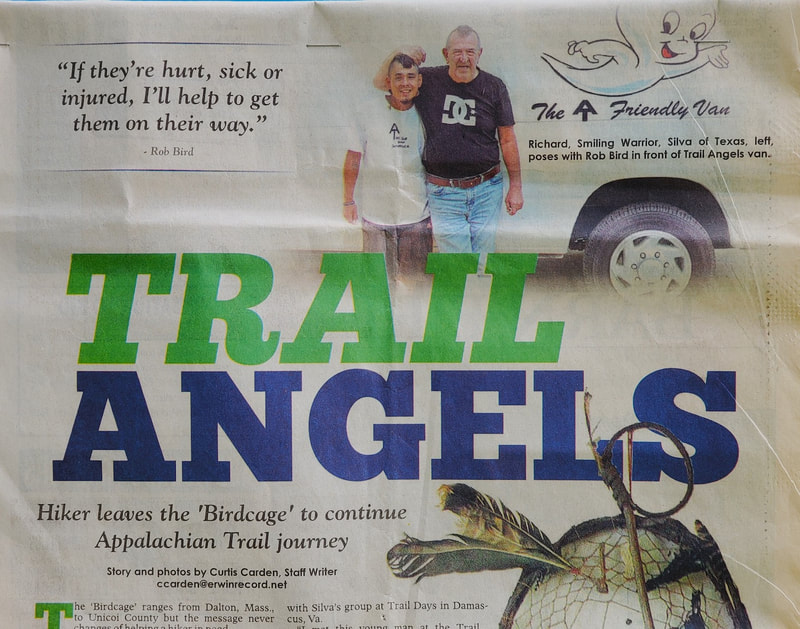 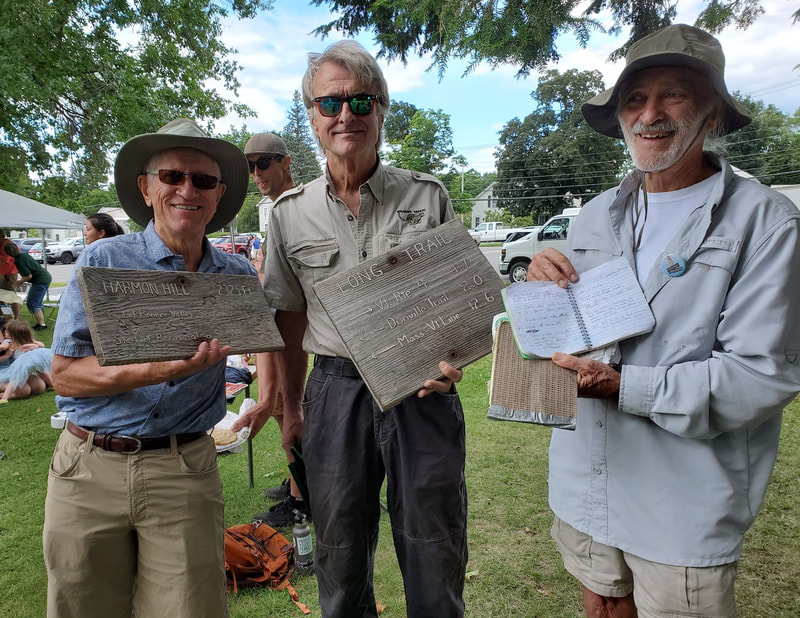 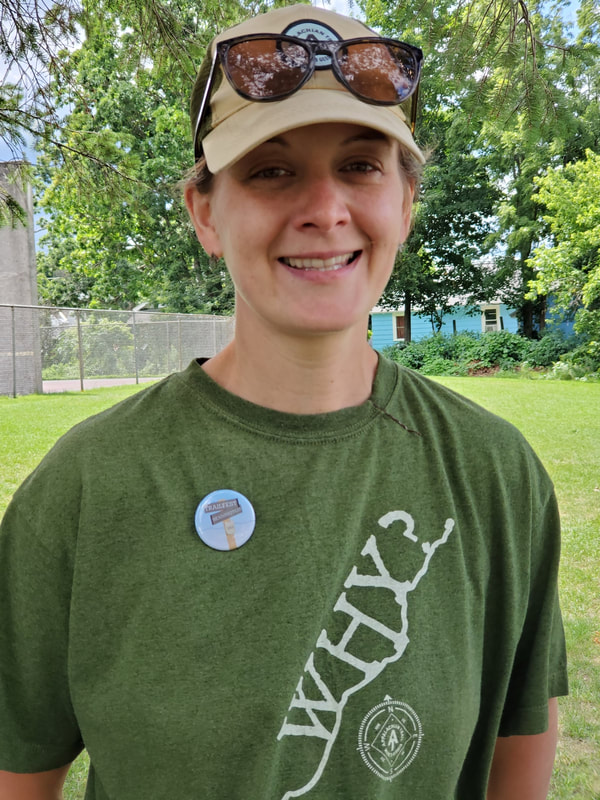 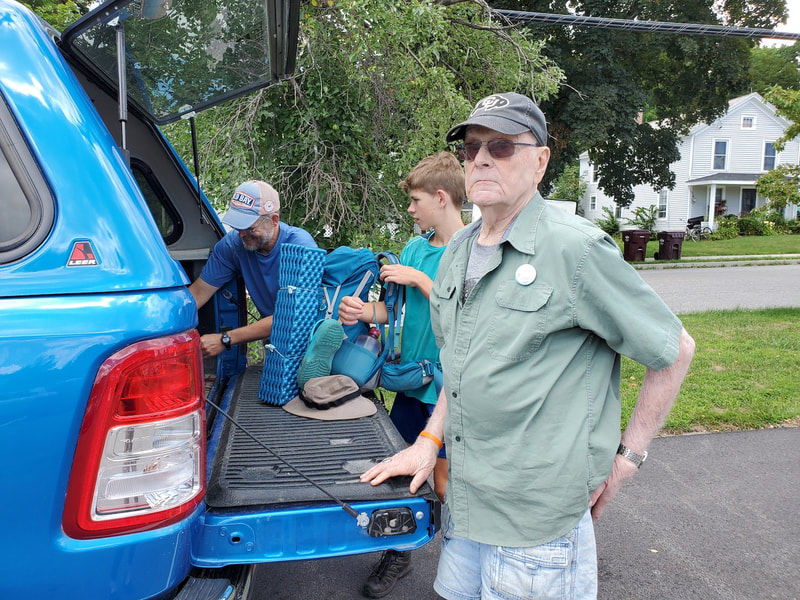 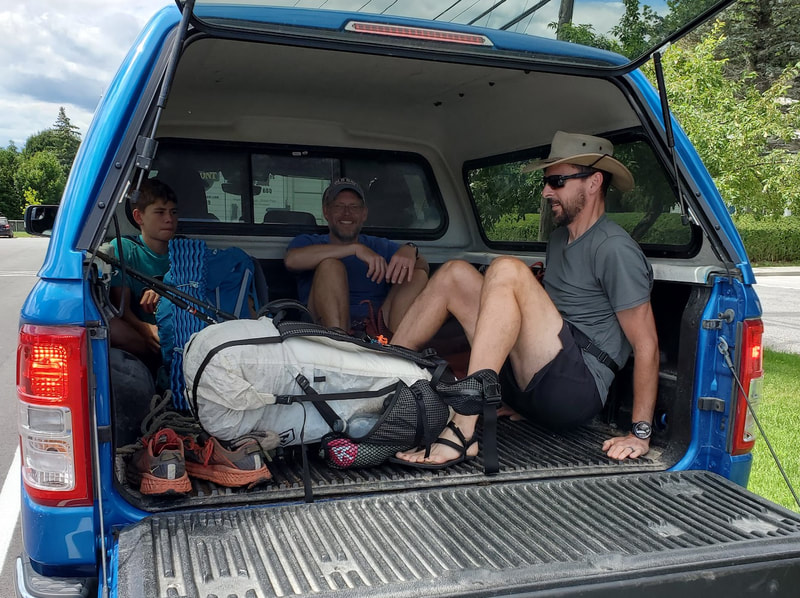 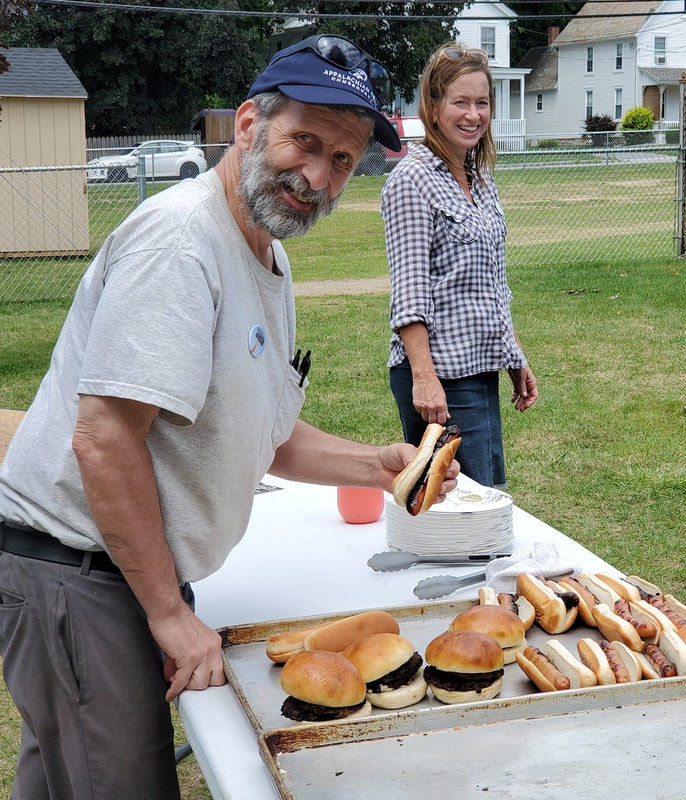 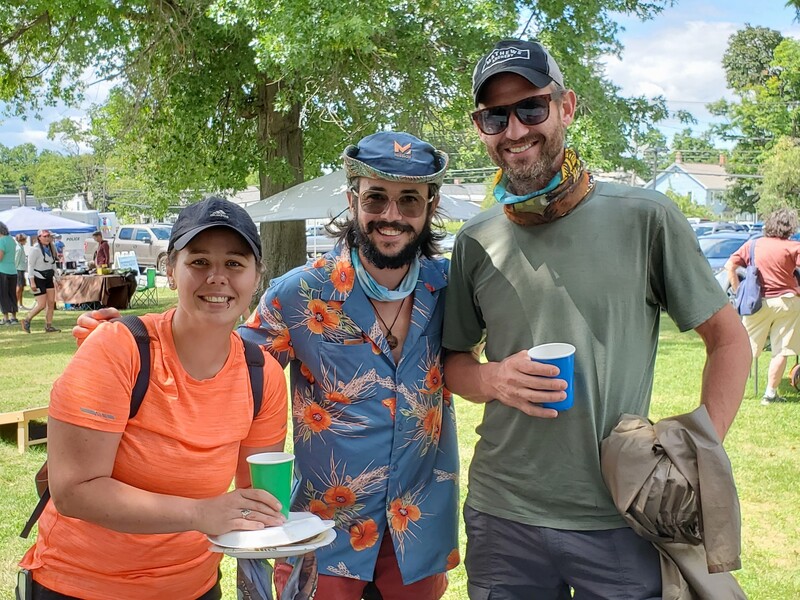 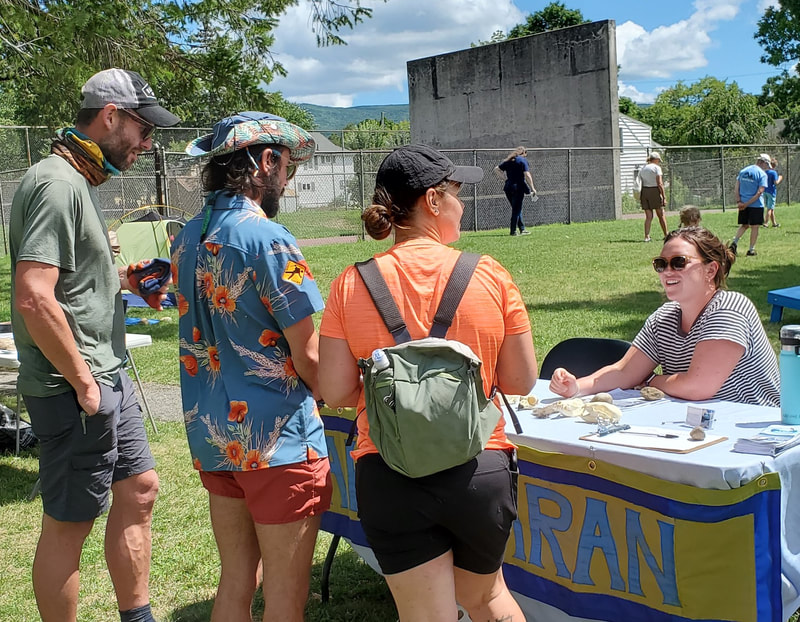 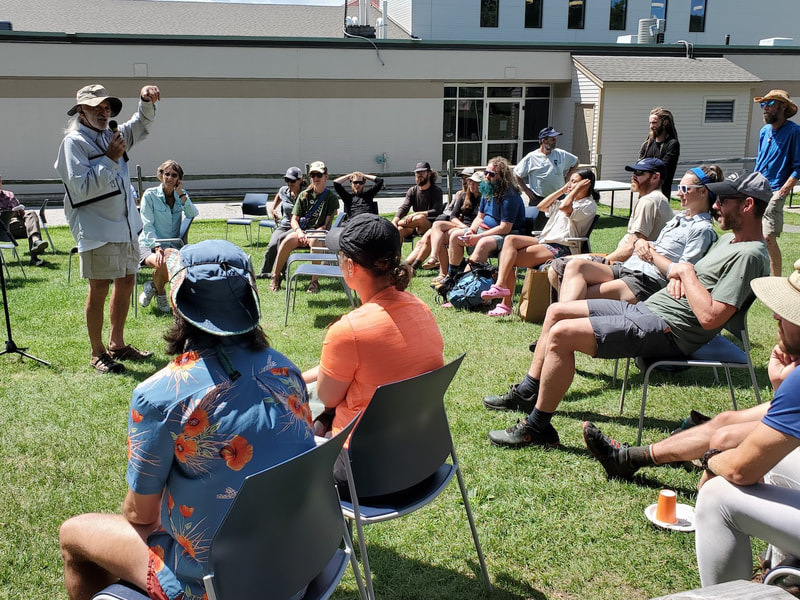 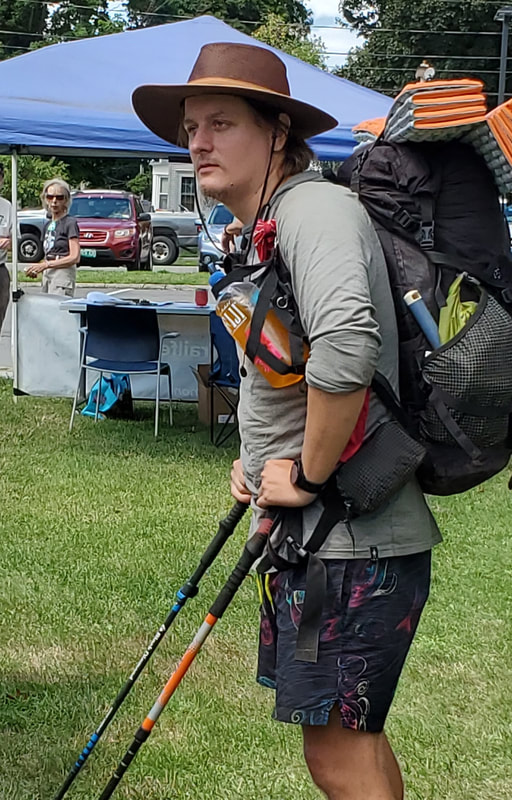 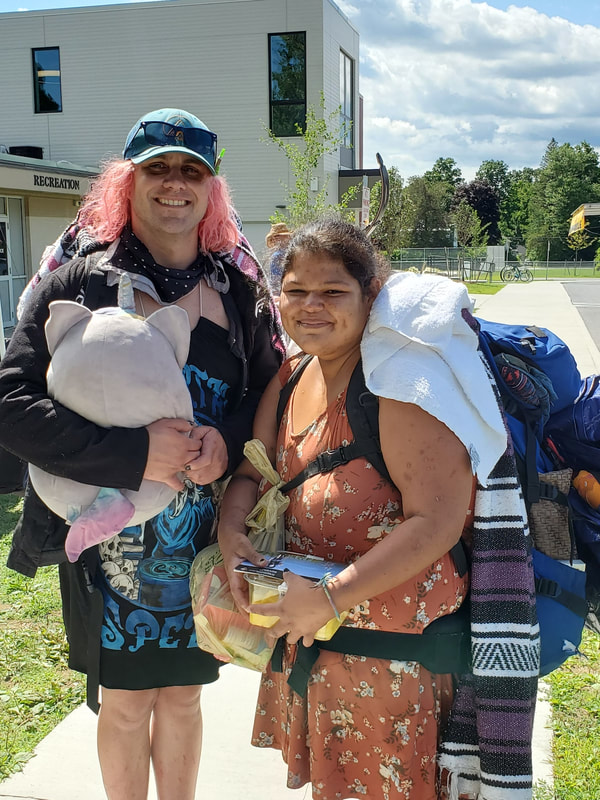 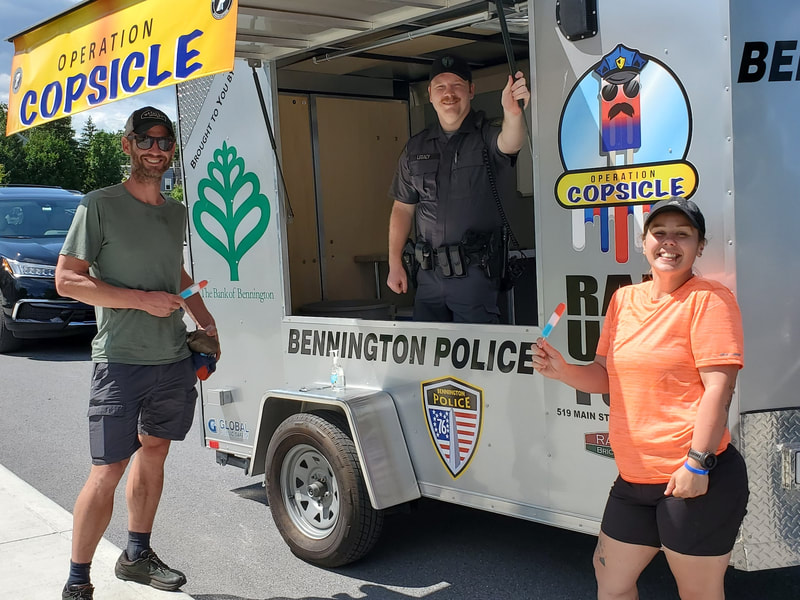 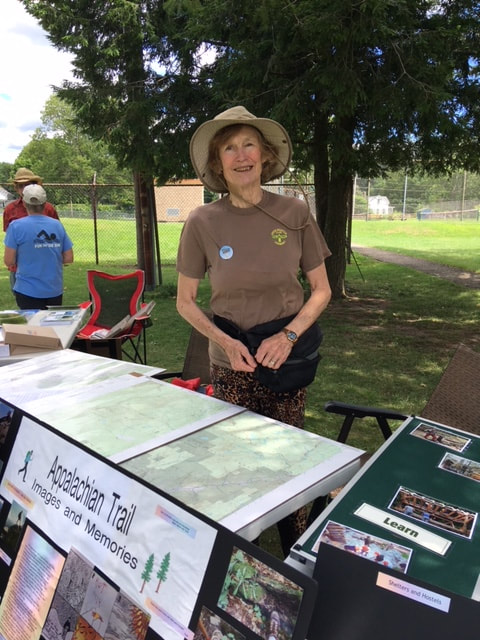 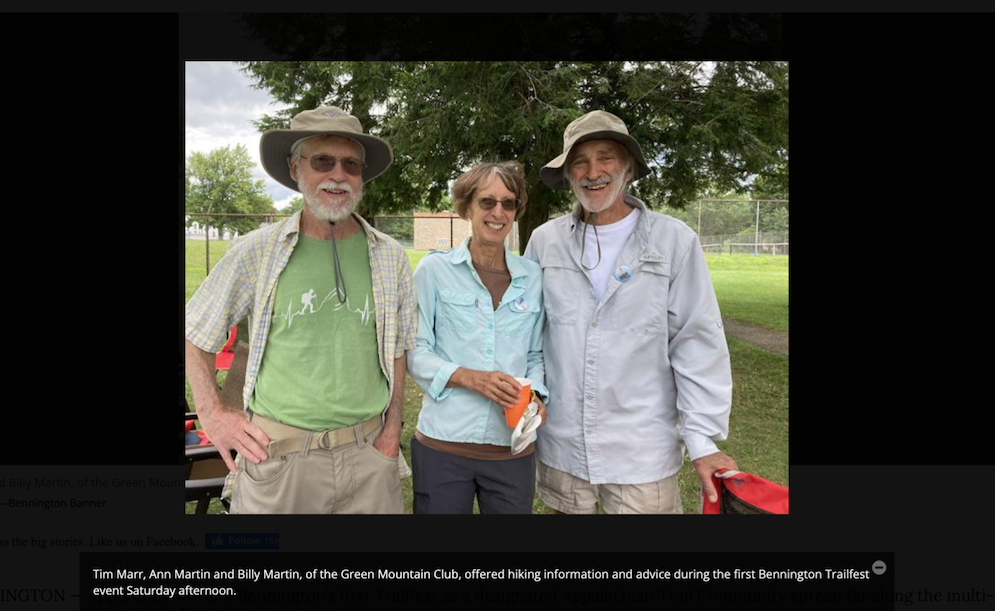 BENNINGTON — Apparently word of Bennington’s first Trailfest as a designated Appalachian Trail Community spread far along the multi-state hiking path itself.
“We had about 200 people attending, including more than 60 thru hikers,” Jonah Spivak, a member of the local trail community committee, said during the Saturday afternoon event at the Recreation Center. “Fourteen camped in Bennington last night, and we have 25 tonight. It was a tremendous effort by many volunteers to pull this off.”
Internet posts and notices left at trail access sites in the region provided Trailfest information, and hikers were offered shuttle rides to and from trailheads north and south of town.

IMPROMPTU CAMP
Not knowing what to expect, Spivak said organizers set up an overnight camping site behind his business, Hawkins House Craftsmarket, and established an overflow space behind the Blue Benn diner.
“It was a pleasant surprise to have first eight, then 12, then I think 14 people camping overnight,” Spivak said, adding that more thru hikers arrived on Saturday.
“We also happened to have an empty apartment available,” he said, “so we’re using that as a hiker ‘sanitation station.’”
Showers, restrooms and temporary storage of backpacks also were provided at the Recreation Center.
FINAL SECTION
Lindsay Feldman, of Baltimore, said she is finishing the only section of the 2,194.3-mile, Georgia-to-Maine Appalachian Trail she hasn’t completed over more than a decade of hiking trips. She stayed Friday night at a trail shelter near Mt. Greylock in the Berkshires.
“This will be my last last 155 miles,” she said.
Feldman plans to finish her trek in Woodstock, where a property owner lets hikers camp on the lawn and makes coffee for them in the mornings. She stopped there during a previous hike south from Mount Katahdin in Maine, the northernmost trail point.
“I just had a really beautiful time ending my section four years ago, so getting to end it again there, it’s really exciting,” she said.
Feldman and her dog, Ivy, were transported to and from a trailhead in the Berkshires by shuttle driver Bill Beattie, of Clarksburg, Mass., who also included side-trip transportation for the art teacher to the Massachusetts Museum of Contemporary Art in North Adams.
Father and son hikers, Jeff and Max Barham, of Silver Spring, Md., said they happened to see a flyer in a trailhead parking lot they passed. They’re hiking Vermont’s Long Trail, which follows the same path as the Appalachian Trail through this area before branching off near Rutland.
FOOD, MUSIC, INFO
The event featured trail and hiking-related demonstrations, information from groups like the Green Mountain Club; the Appalachian Trail Conservancy, which oversees the A.T. Trail Community program; the Green Mountain National Forest and U.S. Forest Service; the Bennington Area Trail System; and the Bennington Museum, which currently has an exhibit called “Parks & Recreation,” on the history of Vermont’s parks and nature tourism.
Food was prepared by The Abbey Group, which provides meals to Southwest Vermont Supervisory Union schools, and local businesses. Greg Van Houten and Cindy Baxter provided musical entertainment.
“This is a great response,” said local AT Community committee member Michael Wajda. And the weather cooperated, he said, despite some early dark clouds.
Wajda served up a stream of trail-related trivia questions during the event and awarded prizes for the first to guess the answers.
PLACE TO ‘REFUEL’
“We’re really excited for Bennington to now be a designated trail community,” said Cassi Spires, a wilderness tech with the Green Mountain National Forest. “I know that a lot of the hikers come off at Route 9 to go to Bennington to refuel. I think to have that sense of community for the hikers is really important.”
Support our journalism. Subscribe today. →
At the same information table, Shannon Wesstrom, with the nonprofit Society for Wilderness Stewardship, said, “We’re really enjoying reacting with hikers and day hikers, talking about the trail and all of the projects that we’ve got going on.”

She said that includes trail shelter renovations and trail construction, which the society does in partnership with the Forest Service.
DOWNTOWN BUSINESS
Ryan and Heather Hassett, owners of Bringing You Vermont and other local businesses, provided samples of Vermont products.
“For Bennington to be a community for the Appalachian Trail, that’s great,” Ryan Hassett said. “We have a lot of people that pass through here. And we’ve also got the [Woodford] General Store – a lot of hikers going there. We have a lot of hikers coming in the [Bennington] Pizza House, and we actually deliver right to the trailhead.”
“I love this kind of event, partly because it expresses our openness to the hiking community,” said Select Board member Bruce Lee-Clark. “And it is a bigger community than people know. I think this has been good for the community. I also think it’s just helps us to recognize that we are so close to the Long Trail and close to the Appalachian Trail.”
He said Bennington is “a great place to stop and sort of regroup.”
“I can say we are pleasantly surprised by the great hiker turnout,” said town Community Development Director Shannon Barsotti, who was serving up hamburgers and other meals prepared on a grill by Maureen O’Neil, The Abbey Group’s food service director for SVSU schools. “And really that is part of the event, to make hikers know that Bennington is a welcoming place and a great place to stop. We’re glad they’re here and enjoying the Rec Center and learning about us.”
OUTDOOR GROUPS
“What I see today is the diversity of so many groups that relate to the outdoors,” said Billy Martin, of the Green Mountain Club. “The Forest Service, the Appalachian Trail community – even the [Bennington] Museum, Lake Paran, the BATS [Bennington Area Trail System] system, everybody.”
“There are a lot of people just interested in hiking or walking and want to learn about it, where to go,” said Tim Marr, vice president of the GMC. “There is a lot more interest over the last 10 years, and there have been big improvements like the amount of trails and how well marked they are. There’s a lot more opportunities.”
Anyone interested in possibly hiking the Appalachian or Long trails can find information on the GMC website, benningtonGMC.org, Martin said.
IMPRESSIVE FIRST
Pittsfield, Mass., resident Tracy Lind, of the regional Appalachian Trail Conservancy office, said that simply to become an AT Community requires strong local and volunteer support, so that “just getting the designation is huge. And doing that during COVID was a challenge in itself [for Bennington] to overcome.”
The Bennington Trailfest “is a great one,” Lind added. “You have a lot of people who are interested, talking not only to thru hikers but folks that just like going out for a day, or just going to an overlook for an hour. A lot of folks are also interested in protecting the greater landscape. This is a fantastic turnout.”
An annual event to celebrate and promote the Appalachian Trail and provide a gathering for local enthusiasts is one of the requirements of becoming a designated community. Bennington couldn’t hold an in-person event last year because of the pandemic.
The town became the 49th trail community in June 2021. The designation was marked in a virtual ceremony.
COMMUNITY INVOLVEMENT
Silvia Cassano, a member of the local committee that spearheaded the effort toward the designation, has also worked with other communities seeking the A.T. designation or planning an annual event.
“With each of those, the trail went right by them,” she said. But Bennington’s Trailfest “has a little more of a community feel, and I’m happy with the amount of hikers that heard about it.”
There were “tons of compliments from hikers who are getting a terrific impression of Bennington and helping impact our local economy,” Spivak said after the Trailfest. “We have set the stage for an annual event.”

Nature calls. Will you answer?

Contact us if you have any comments, additions, suggestions
Last updated: March 2022